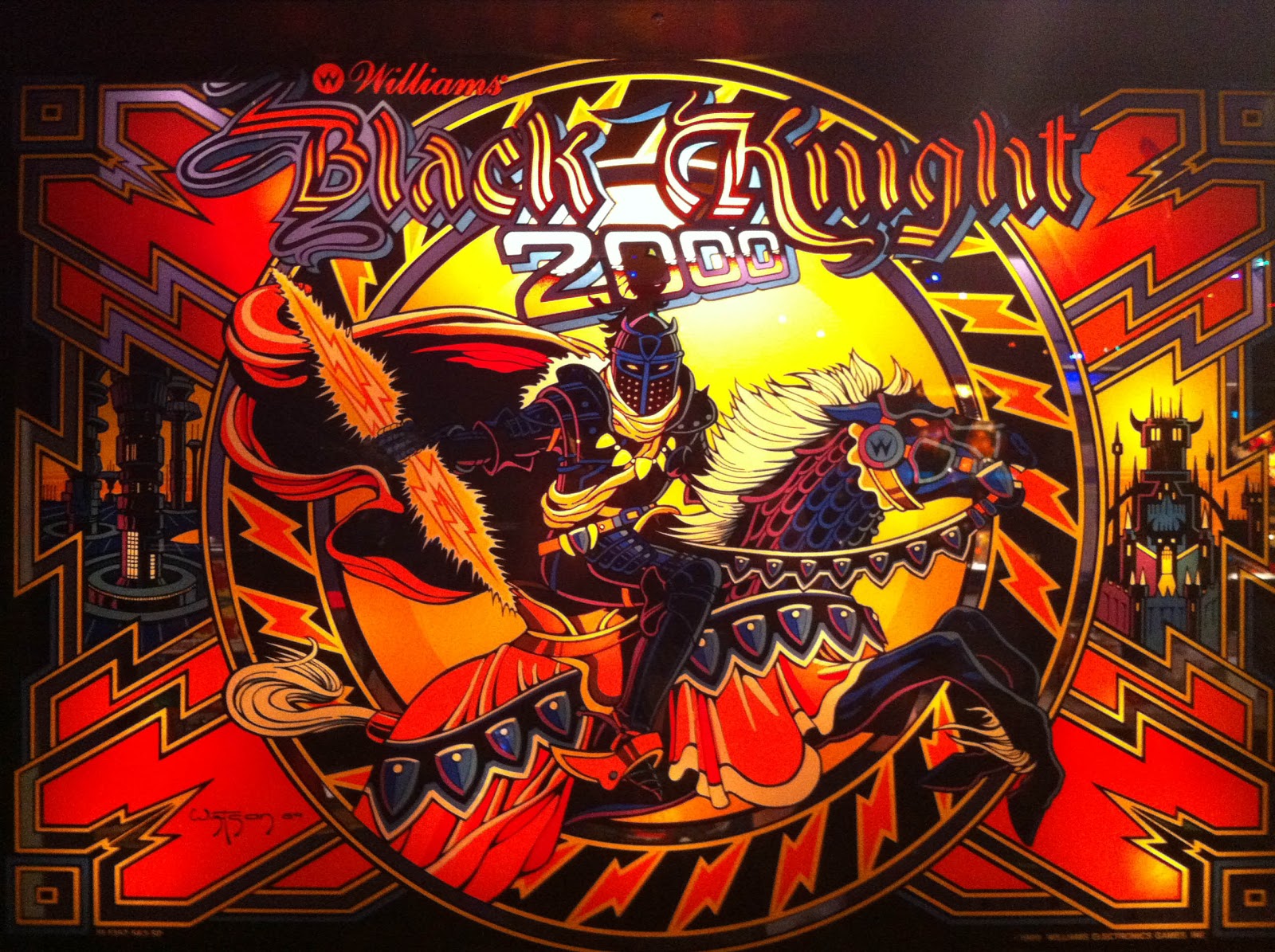 Anyway let’s do a simple machine from the Game Request list…. Black Knight 2000 or BK2K for short. It is the only game you can LITTERALY play with one flipper! I owned a BK2K for a number of years and really like the game not because of game play, that is repetitive as shit, but 100% because of the theme/music. BK2K has what has to be the best Soundtrack in all of pinball! Even now thinking about it brings a smile to my face.


We will get into the meat and bones in a bit and the reason I said it can be played with one flipper is because the major points are all on the right flipper. The upper and lower right flipper are really the only thing you need and the entire lower playfield can basically be ignored.

On the upper playfield you have your normal bonus X lane, a loop of sorts, the W-A-R lanes and a 3 bank target that lowers to lock a ball.

The basic strategy to this game is to keep looping around the loop as much as possible. Each loop is worth some amount of points (I forget how much) and continues to increase to I think a max of 100,000 per loop. Plus each upper loop also adds onto your bonus, lights hold bonus X on the left ramp and lights the extra ball for the left ramp. So it can be quite lucrative to keep shooting that over and over again.

When you miss the loop you most likely are going to hit the 3 bank to light your locks eventually. Once they are lit you can try for them otherwise just keep going for loops and when you mess up and it’s heading into the lower playfield you want to get one of the W-A-R letters.

So basically you spend the entire game with the right flipper doing this:

1. Plunge Ball
2. Maybe get some bonus X, maybe not
3. Ball gets to the upper right, shoot some loops, maybe light lock, maybe not.
4. Screw up and finally head down and hopefully get a WAR letter on the way.
5. Ball exits the upper playfield to the lower right flipper so collect a W-A-R letter.
6. Perform a live catch or sometimes you can just hold up the right flipper to grab the ball.
7. Shoot the left ramp to start the process all over again on the upper playfield.

The multiball is very simple and a roaming jackpot that increases from bumper hits. It carries over game to game and once collected resets to a value of something like 500,000. You lock 3 balls, start multiball, shoot the lock again and Jackpot is awarded...the end. You have to drain 2 balls and get back to single ball play again before you can light lock again and start multiball.

The lower playfield is pretty much useless and the risk of draining while down there is huge. So it’s not worth the risk to spend any time down there with how many of the points can be found on the upper playfield. The only thing worth doing down there if you’re feeling lucky is to shoot the little inner loop beside the center 3 bank of drop targets.

Depending on the settings, 2 - 3 shots will light a multiball start on the right scoop. It’s a 2 ball multiball where the objective is to complete the W-A-R lanes and for each completion you get 1 million. Not a bad payoff but the risk isn’t really worth it.

The last thing to mention is the RANSOM. On the speaker panel there are letters with lights behind them that spell RANSOM. In order to collect them you need to complete the bonus X roll overs. This will start an insert flashing on the multiball lock shot. If you can lock a ball before that insert times out, you add a letter to Ransom. These hold over game to game and when completed start a 30 second multiball with infinite ball save I think, where basically everything is lit. Kind of a fun little feature to get every once and a while.

Completing both the 3 banks of drop targets will relight your Kickback on the left side and Magna save on the right if you have used both of those up.

That is basically it for BK2K and like I said above, if you are good at live catching/drop catching or the game is playing easy you can very literally just play this game one handed.