A few weeks ago Wong and I were chatting and he sent me a pinside thread that was discussing the really nasty sound all WPC games make from the speakers when the games are turned off. Mike said that all his WPC games do this but his Creech was particularly bad and it was driving him crazy. For anyone here that owns a WPC game (pre WPC-95) they know exactly what I'm talking about, it's like nails on a chalkboard! (I've hated this noise as long as I have been a collector) I told Mike it's unfortunately a problem with the sound board design, and there used to be a product made by a collector YEARS ago that would eliminate this nasty power down artifact, and sure enough this came up in the pinside thread. Unfortuantely this product was no longer available, so Wong gave me the idea to look into producing my own version.

Now, just for reference here is a picture of the previous product that was available installed in a FT and you can see it screwed to the back of the lamp insert. 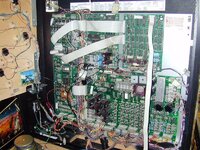 Over the past few weeks I've worked on designing my own version, trying to make some improvements over the previous iterations that were available and after two rounds of prototyping I now have a cool little product that I'm happy with. 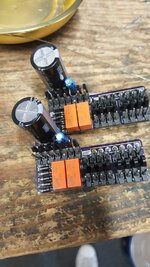 As you can see, it's quite a bit smaller and it installed directly onto the sound PCB power connector. No more screwing anything down anywhere in the head! I also designed this to work on both WPC89 and WPC-DCS sound boards even though the DCS boards are not affected nearly as bad as the WPC89 boards. (The previous version only worked on WPC89 sound pcbs)

Here are a couple of quick shots of the installation, which literally takes less than 1 minute. 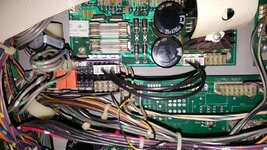 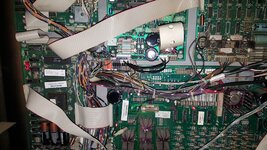 It fits in neat and tidy between the sound and driver PCB's with enough space to keep everyone happy.

And here are a couple of quick vids showing pre and post install power downs with my first prototype.


As of right now I'm posting this up to get the word out, as I am toying with running a batch of these. Cost at this point will be $40 USD plus shipping for the WPC version and $45 USD for the WPC-DCS version and will come with their respective PCB and all the wire harnesses so it's a completely plug and play system. I have to run 100 of them to make it worth doing so for those interested drop me a PM and I will start compiling a pre-order list.

I would be interested in a couple of em Doug. That sound always raises the hair on the back of my neck!


Sent from my iPhone using Tapatalk

Same here. My FH, TAF and a few other games could use this. Put me down for a couple to start.

Basically anything pre-DCS needs this for sure so count me in for at least 4 more on top of the sample I'm currently testing in my TAF.

I'm in for the exact # I would require Doug! Must count! Well done.

Are these still available?

The PCB shop I used to spin the boards screwed up my order, and I just haven't bothered to bring in enough blanks to motivate me enough to make them.

I have a couple of people interested in them... If everyone still wants some I can look into making up a batch.

If people reply to this thread with how many they would like, I can make a list and look into ordering all the parts.

Put me down for two or three.

Ok, here's a running tally of who wants these and how many. I will continue to update this list as people message me their requests. In the meantime I will begin to figure out how many I need to make in order to keep the costs in-line.

I've been running one of these in my TAF for almost a year without any issues. It works great and the "pop" you hear when shutting the game off doesn't actually hurt the game it is as annoying as hearing nails on a chalkboard to me.

superjackpot said:
Doug, put me down for 3 please.
Click to expand...

My TZ recently suffered from resetting itself when both flippers were pressed. 123VAC coming in but the 5V line was around 4.8V, which is marginal. I elected to replace the LM323K T0-3 linear regulator with a cooler running switching supply, the PSU5 http://www.ezsbc.com/index.php/psu5.html and now the rail is 5.01V. I also replaced the 12V 7812 linear regulator with the http://www.ezsbc.com/index.php/psu3-12.html regulator and now the rail is a solid 12.1V (was 11.2V). The only side effect is at shutdown. The TZ always made a large pop sound at shutoff but now the sound seems to be modulated by the new switching supplies making the shutoff sound more like the TZ is flatulent. You can listen to the sound via the URL below. I'm hoping the no-pop boards will remedy this annoying sound.

Any status update on the no-pop kits?

It will most certainly address the issue you are experiencing. The reason these games have this issue is the way the sound PCB power supply is designed...

I have to dig out my BoM and price out all of the components for a build of 25-30pcs and see if I can make the numbers work. My original pricing quote was based on an order of almost 100pcs to get the parts costs down as low as possible. I'll see how many blank PCB's I have and I'll try and get the pricing confirmed this week.

I looking forward to testing one as the sound the TZ is making when shutting down is awful.

I mainly need this for FH and TAF, but if it'll help with my other games too, I can take more. I don't notice as much noise on FT, IJ and other WPC games I have though

I designed the PCB to work with the later DCS games as well but those sound PCB's are not prone to the same shut down noises as WMS changed the design. I figured why not as the only things I had to add to the design was a couple of headers and a cable, so it was minimal cost.