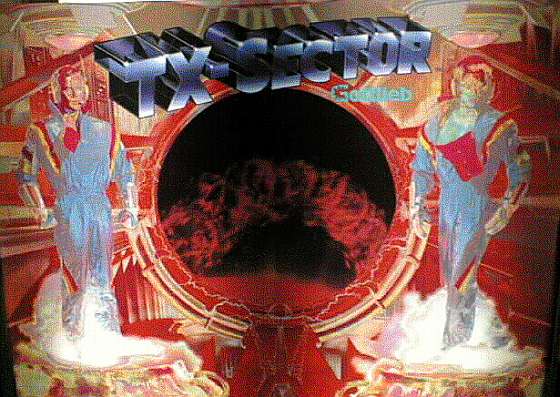 Tx Sector now there is a funny game balled up into awesomeness! It is one of those games that is just fun to play even though the gameplay is nothing great. It’s kinda in that same league of games that suck but suck so much they are AWESOME such as Genesis, BK2K or anything else Williams Fan might have folded in his garage currently (last bit of colour commentary added by mwong )

From a game play perspective it’s simple, shoot the lit spinner! That’s it, that’s all, that’s the entire game just shoot whatever spinner is lit since there is nothing else on the PF that is worth as much as a spinner that spins like crazy on this game.

Of course there is a bit more to the game then that, simply put there are “Levels”. When you reach Level 10 it enables lock and then you lock a ball either on the left ramp, right ramp, or inner loop. You advance levels by either completing a set of drop targets or when you nail the right spinner there is a standup to the left of it that you hit that also advances levels.

After the ball is locked you will get a 2 ball multi-ball and Extra Ball will be lit on the stand ups on the right and left side. It will switch between the left and right side for each switch hit.

There is really one more piece of scoring info when you hit the drop target in front on the left ramp it starts a transport X that counts down from 9x. If you can hit the Transport shot while the multiplier is counting down it will then multiply the current level (10,000 per level) by the value of the shot multiplier. So as an example, if you are on level 10 with lock lit and you drop the drop target, then make the shot with the 9x shot multiplier you can get 900,000 for a single shot which is pretty good considering the scoring levels.

But still the spinner is worth usually about 300,000 to 500,000 a spin so much less setup and work to just nail the spinner. That is really the end of the game play portion of this game. But what makes TX Sector fun is just the entire package. First and foremost you are caught off guard by really a god awful translite.

Where you look at it you are like "Is it supposed to look like that? I thought it was just really, really faded or got exposed to something it shouldn’t have but nope it’s supposed to look that way. Then it has a great music and sound FX package that is just so over the top you can’t help but smile when playing. The “TX, TX, TX” sound effect is just funny and the sounds that come out of the game when you nail that spinner are just awesome!

Then you have the “Transporting ball effect” where a ball is shot on one side of the playfield and “Appears” on the other side as if it had been transported over there. At least I think that is the effect that the translite is trying to simulate. Really they just keep a ball locked on one side to simulate the effect but it’s still amusing. TX Sector is like a really bad movie at first you’re like “Man this game sucks” and then after a few more plays it changes to “OMG this game is AWESOME!”

Here is a game review video by Mark of Classic Game Room.

This layout always reminds me of JD.

I've watched that vid before. Mark appears to be having just a little too much fun playing this pin.
Played my first one in Allentown earlier this year and, even though I could barely hear the sounds, the shots and layout were enjoyable.

I have one but it's busted at the moment, need to do the ground mods.

Although you said it Adam, I will reiterate, this is a perfect example of an unbalanced scoring pin.

When I first came across this game and played it, I strived for multiball and truly played the game. The neat layout, cool techo sounds and overall package encouraged this. It was fun! An excellent game imo.

When this game was suddenly added to the Classics playoffs at our CPC tourni back in July, all anyone ever shot for (those who knew) was the lit spinner. While there is some challenge in lighting the spinner, it's a strategy that by far outweighs anything else you would want to shoot for if playing for points. At CPC 'playing' the game cost me. By the time I caught on, it was too late to shoot spinner, spinner, spinner...