Well I started off with a game I like, so let’s move on to a game I loathe… Theatre of Magic, I’ll never understand why people love this game so much. Usually people talk about the light show or the magnet picking the ball up off the PF or the theme. They never talk about the game play because it sucks. Theatre of Magic suffers from what will be my biggest gripe in a lot of machines I don’t like... singular over powering strategy, making the rest of the game not worth playing. Now you may think it’s the multiball or the modes but it all comes down to one single shot THE LEFT ORBIT.

The left orbit spots letters in T-H-E-A-T-R-E, spelling Theater starts a 50 million hurry up and when you don’t make a shot all the way around the left orbit it falls into the roll overs at the top that add to your bonus X multiplier. 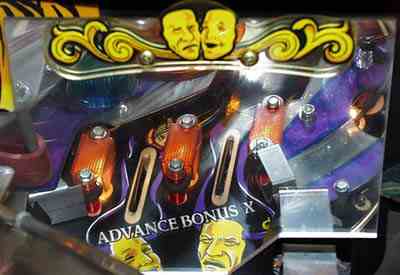 The left loop is also 100% repeatable with ease meaning you can also build up the combo shots at 2, 4, 6, 8, 10, 12 etc, etc million. Also for every letter that you collect in Theatre it adds to your overall bonus count too. See where I’m going with this? Every letter gets you bonus, starts a hurry up, combo, and possibly bonus X multiplier. This can all be done in one shot that you only ever lose control over when you miss. When I play I see bonus counts in to 300 – 600 million range and I haven’t done anything but shoot the left loop. :FP:

If I miss the left loop and the ball ends up on the right flipper I may spell M-A-G-I-C by shooting the lit staircase and lock two balls so that once I’m done spelling theater the hurry up will be easier to collect. But I’ll never go for the other modes when playing. I may also take the skill shot mode off the ball plunge by hitting the trunk for Straight Jacket escape since that feeds balls into the top rollovers. This will help me get my bonus X multipliers up and I’m shooting the left loop anyway. I may even start Levitating Woman off the skill shot because you can combo that center ramp pretty easy and rack up some decent points too. Once those two are done I’ll never touch another mode. Why?

Think about it, it takes 3 shots to the trunk to get it to turn around so you start a mode. Once you are in that mode and if you play it to completion you might get 100 million for the mode? The entire time the ball is leaving my control and I have to hope after hitting that stupid trunk 3 times that I still even have a ball to start the mode with. It’s just not worth the risk when I can keep shooting the left loop to my heart’s content or until I die from BOREDOM! Theatre of Magic is the perfect example of a game with one singular over powering strategy. Nothing else in the game is worth as much as that left loop. As a result when playing from a tournament perspective you just end up watching everyone shoot the same shot, over and over and over again. Whoever does it the most wins, it’s about as unexciting as pinball can get. The only other scoring opportunity worth mentioning would be the 100 million shot in the multiball.

Some of you may have noticed when the multiball starts you hear the chick counting down “3…..2…..1” if you can nail a jackpot before she reaches 0 you get 100 million right off the bat. The kick out from the trap door is usually a pretty easy drop catch so making the 100 million shot isn’t too tough.

A drop catch is performed by holding the flipper up and dropping it as the ball arrives. If you time it correctly, the ball will have no momentum allowing you to trap/cradle the ball to aim your next shot (THE LEFT LOOP) with greater accuracy.

You can also raise the jackpot value by doing can you guess what? Yup shooting the left loop! I forgot to mention the drop catch off the left loop is really easy since the ball through the roll overs exits slow enough that a drop catch is really easy to do. If the slings are not sensitive you can just hold the flipper up sometimes. Doing that you can raise the value of the jackpot to 100 million but the problem is always going after the trunk again to get jackpot lit since you always lose control of the ball going after the trunk.

Anyway I’m sure some people loving play Theatre of Magic but I can’t. I always end up trying to play for score and if I’m playing for score I’m shooting the left loop. Give it a try sometime, I didn’t believe myself until I was talking with someone about it at a tournament and they told me about that strategy and I tried and it works.

Wow! There's another good reason to not have ToM on my list anymore. Other than space and desire for too many other titles...
Thanks again Adam!

I was in tears while editing and dressing up the analysis this past hour here at work. I'm afraid I will never look at my beloved Theatre of Magic the same ever or maybe I will install a rubber blocking the left loop when Adam comes over

Thanks again for the analysis of TOM and killing my potentail future sale I had lined up with Todd for my TOM you bastard!
S

I had an absolutely beautiful, HOU, out of-the-box like new condition TOM. Sold it after a year. One of the best looking games, great toys and fantastic flow. I found it became too easy. Even after boosting the incline. When a pin, DMD, is at my place I always play to get and complete the wizard mode, mostly. In TOPL or tournaments I go for points. TOM is easy to get to the wizard mode and the worst part is the wizard mode sucks big time. That is why it left. I wish someone would recode it. It could be a great game with a change in the ruleset. Now after reading Adam's review he gave me another reason not to like it. You totally destroyed it. I bet if you posted this on Pinside you would see a bunch of them up for sale in a short time. :lol:

Here are pics of the TOM I had.