Last night was the live CBC broadcast of the final stop in their "Man Machine Poem" tour. This could turn out to be one of the most watched programs in Canadian history, the numbers are still coming in. So where were you when The Hip played Kingston?

Yesterday we had a bunch of friends over. I started early in the day with a large pork shoulder cut in half on the smoker and prepared the backyard for the night. To watch the concert, I connected my projector outside to shine on the back wall of my garage. With a large dinner of pulled pork, chicken wings, corn on the cob and a bunch of side dishes we started the show with about 20 of my closest friends and neighbours. The rain managed to keep away until the show was over. 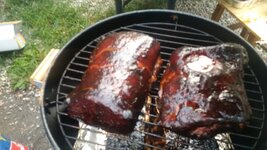 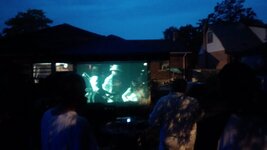 I've seen The Hip live many times, and I didn't think this was their best performance. To me it seemed Gord was trying to hard at the beginning, before he fell into his groove for the rest of the show. 30 songs and almost 3 hours, I can't think of many Canadian acts that could handle that, and there are so many more hits that they didn't have time for.

I was at the A.C.C. Show on August 12th. and think the crowd was more into the show than they were in Kingston, although that is tough to tell with a tv show. That night in Toronto, was a surreal experience, one that I'll keep with me for a very long time.

Years ago I saw The Hip in Kitchener at The Center in the Square. For that show we had great seats close to the band. I even said after that show that I'd probably never have another chance to see such a great performance, but that night in Toronto was electric.

Needless to say, I'm a big fan and will miss hearing new music by them.

In retrospect, it's amazing how their entire career poetically foreshadowed their end. Not only did they have many great songs dealing with tough topics like death and over coming adversity, but if I needed two words to sum of Gords career; Tragically Hip kinda speaks volumes about the life of a great artist.

I'm going to go get a new copy of Day for Night. And look for Plan A (the cd is here somewhere) 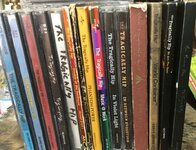 I'd love to hear stories about shows you've been to, or about where you were when The Hip played Kingston. 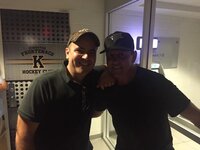 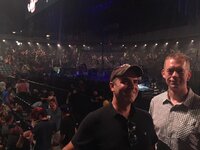 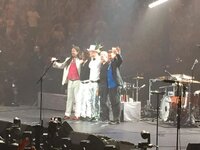 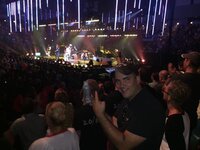 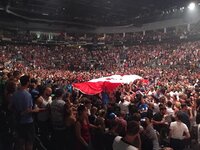 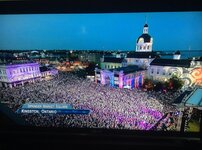 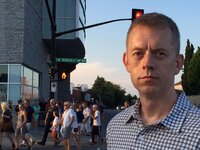 My buddy from Ottawa met me in Kingston yesterday.
That's him with Doug Gilmore.
I could say that it was an epic-fucking show, but you know that already.
Reactions: Menace

It looks like you had great seats, much closer than my Toronto show seats.

I was at the Molson Amphitheater for Blue Rodeo. They dedicated Bobcaygeon to their "brothers in arms playing tonight down the river". During the song the big screens showed the CBC feed of the Hip show. Not a lot of dry eyes at the show during this moving and fitting tribute.

Is the archive of the CBC broadcast available anywhere? Doesn't appear to be on the youtube page.

Between my wife and I we could only name four Tragically Hip songs. And only one Blue Rodeo song. Seriously. I'm sure admitting this will have our Canadian passports rendered null and void immediately. Their brand of music just doesn't speak to me...

All good things must come to an end. They've left quite a legacy regardless.

Sent from my SM-G920W8 using Tapatalk

Chris Bardon said:
Is the archive of the CBC broadcast available anywhere? Doesn't appear to be on the youtube page.
Click to expand...

No, apparently the CBC's role was to air the concert one time as a live broadcast and that was it. It will be up to The Hip to make it available going forward as they own the rights to the show.

As for where I was for the show, I invited some friends and neighbors over and setup the projector and screen in the driveway along with a nice little PA and we all enjoyed some beverages and snacks while reminiscing about growing up with their music and attending shows etc.

It's quite amazing how much music has an emotional impact on your life, and specific memories... I found myself fairly emotional all day.

Menace said:
setup the projector and screen in the driveway along with a nice little PA and we all enjoyed some beverages and snacks while reminiscing about growing up with their music and attending shows etc.
Click to expand...

We did the exact same thing in our 'hood. Lots of good times reminiscing and watching the show. We had perfect weather here in Ottawa for the evening which was an added bonus.

We were up at a friend's cottage in the Kawartha Highlands watching it Saturday night... The thing I'll remember most about it was going out on the deck to talk with some friends, and noticing that you could hear that every cottage on the river was watching it! The music from the broadcast was carrying all up and down the river... In this day and age, everyone tuning into the say thing seemed surreal!


Sent from my iPad using Tapatalk

For the finale we went to the park in Barrie. The town had it up on a big outdoor screen. About 1000 people.

Was also at the Friday concert in Toronto. This was my first ever concert. My friend got us front row center. It was dead center. The Toronto show had way more emotion than the Kingston finale.

New member, just checking out the site...I pvr it...but was at the lodge on the night.....opened the doors and cranked it, in the middle of nowhere, off the grid, solar power tunes filled the lake.....loons in the background, beer caps popping...so Canadian thx T.Hip...
You must log in or register to reply here.
Share:
Facebook Twitter Pinterest Tumblr WhatsApp Email Share Link
Top Bottom