Finally got my PBL, Pinbits and Cliffy order last Friday so this weekend I spent a few hours installing on Judge Dredd. 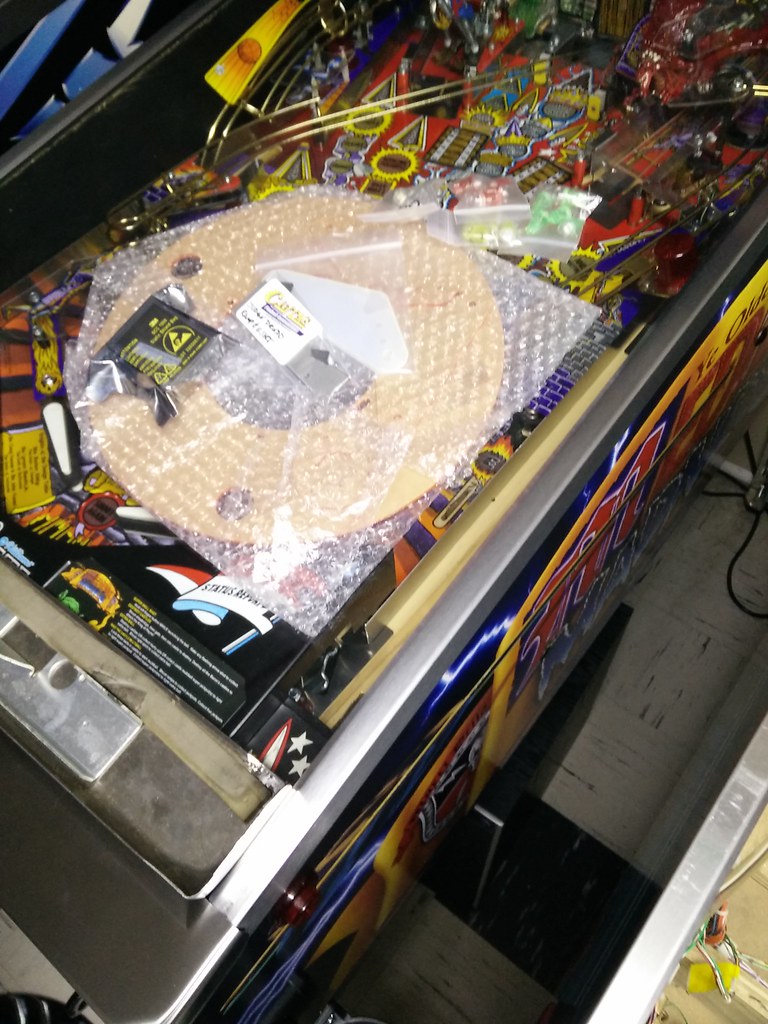 I had a helper this weekend, Floyd, as I am dog sitting while Drano and his family are away on vacation :lol: 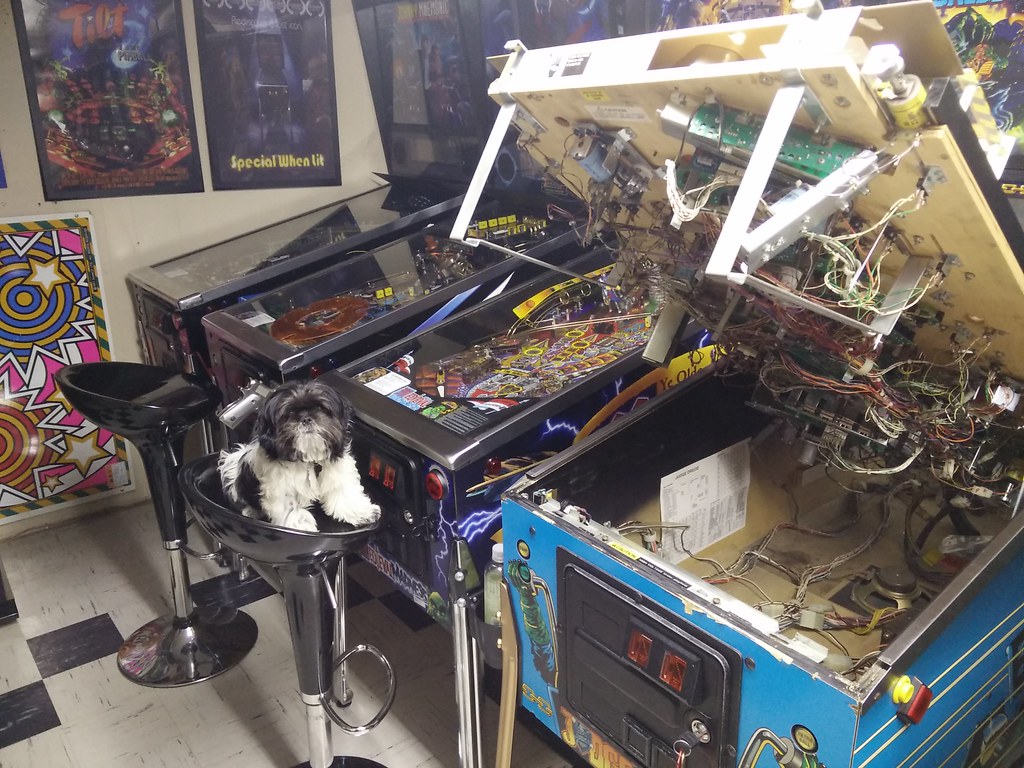 First thing I had to do was protect my investment and install the Cliffy protectors. Since there is quite a bit of multiball action on this game as well as the industry's first and only SUPER GAME option, the shooter lane can take quite the beating. 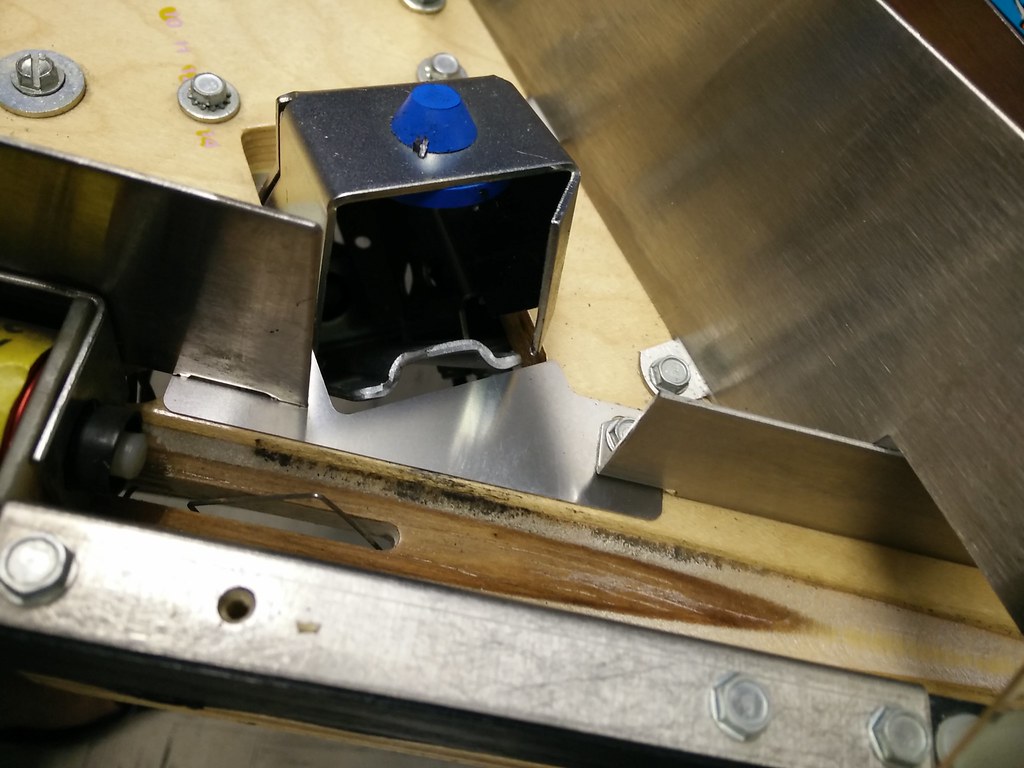 The end of the ramp ramps are either busted off from the screw mount or cracked like mine so I order the ramp patch kit. 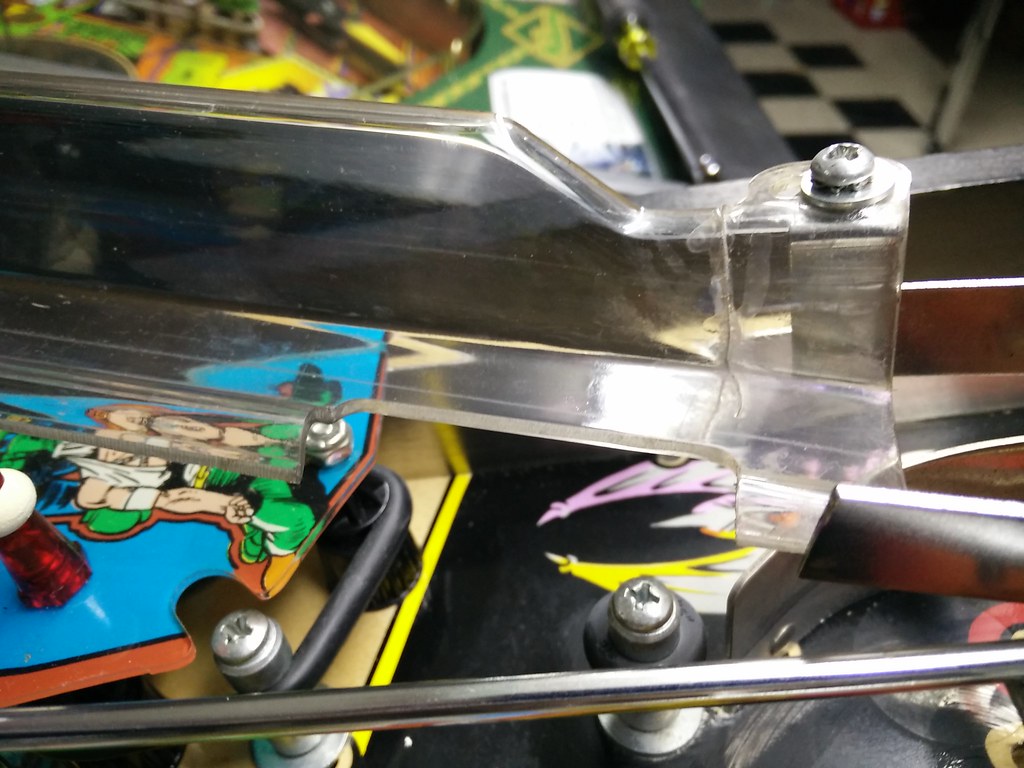 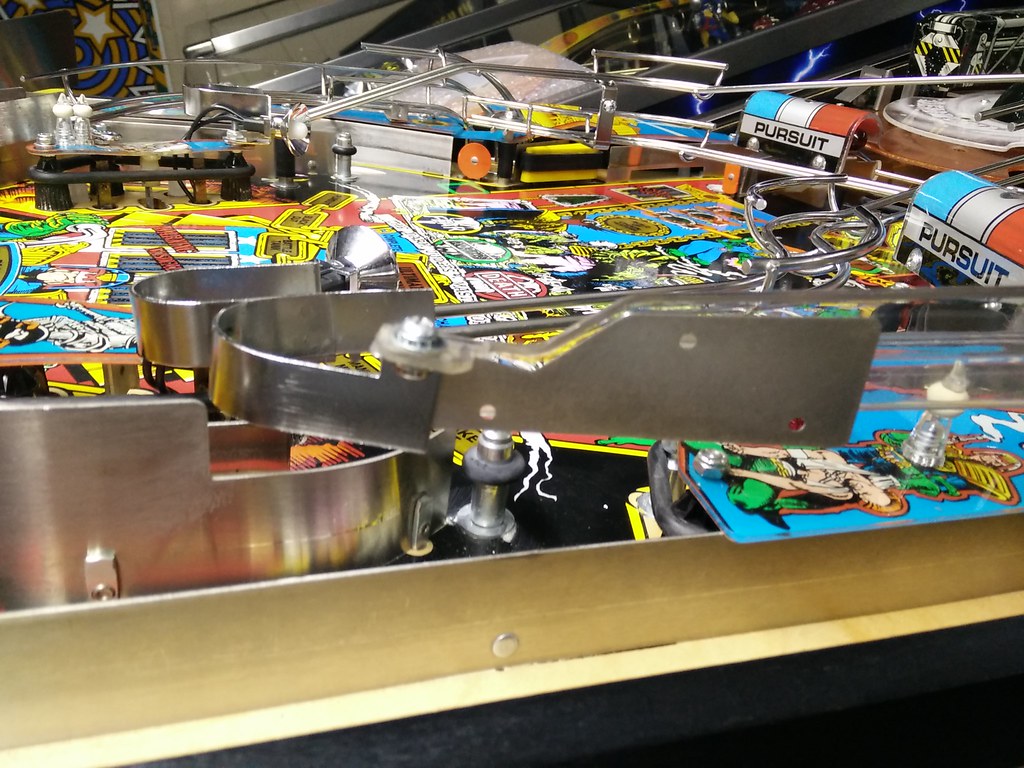 It's always a bit nerve racking when it comes to drilling into plastic ramps but I've got tons of experience from drilling my Tron ramps for Eli's fiber optic kit. I should fill in the existing crack so it doesn't get worse, suggestions anyone? 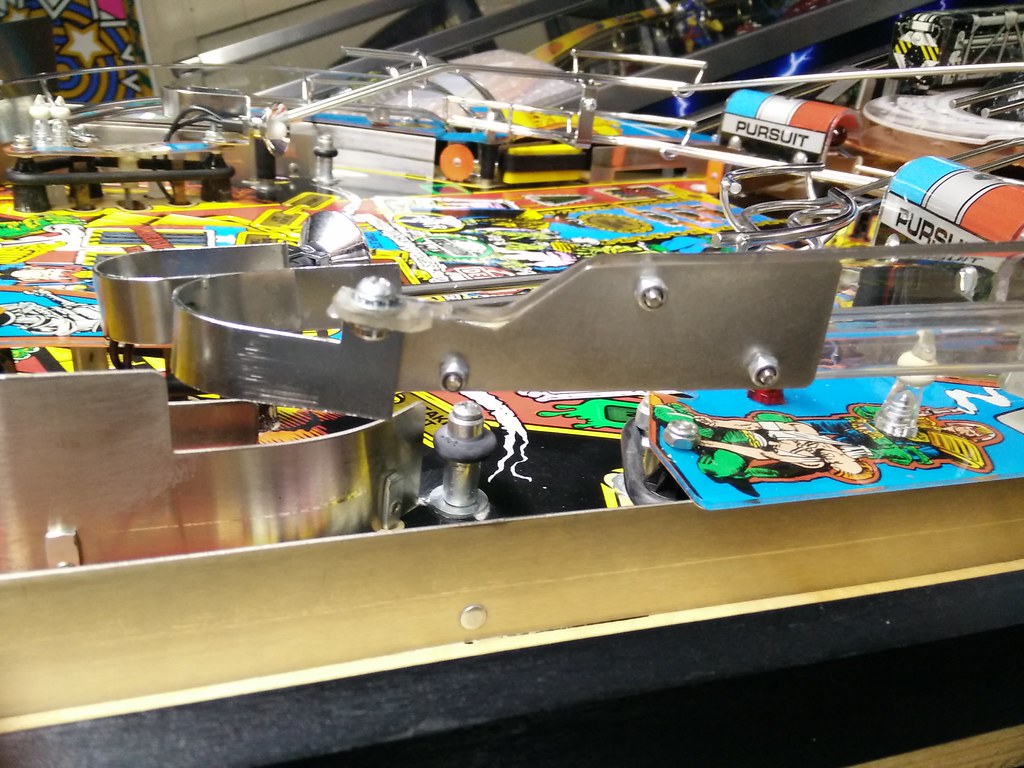 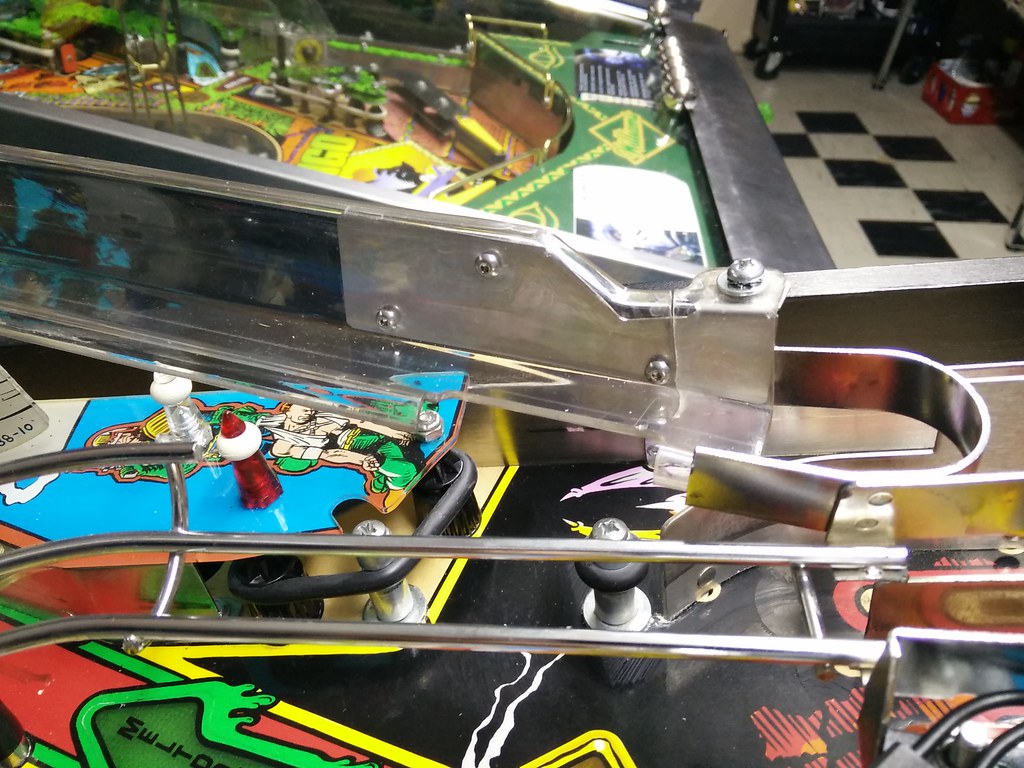 My next item which is a big pet peeve of mine is replacing stripped leg plates and thank god it was only the front ones. Since I got the game a few weeks ago the front legs were only held on with one bolt on each leg. I don't get why people reef on these bolts or don't realize it has gone in a bit crooked before they proceed to tighten and cross thread the holes in the plate :x 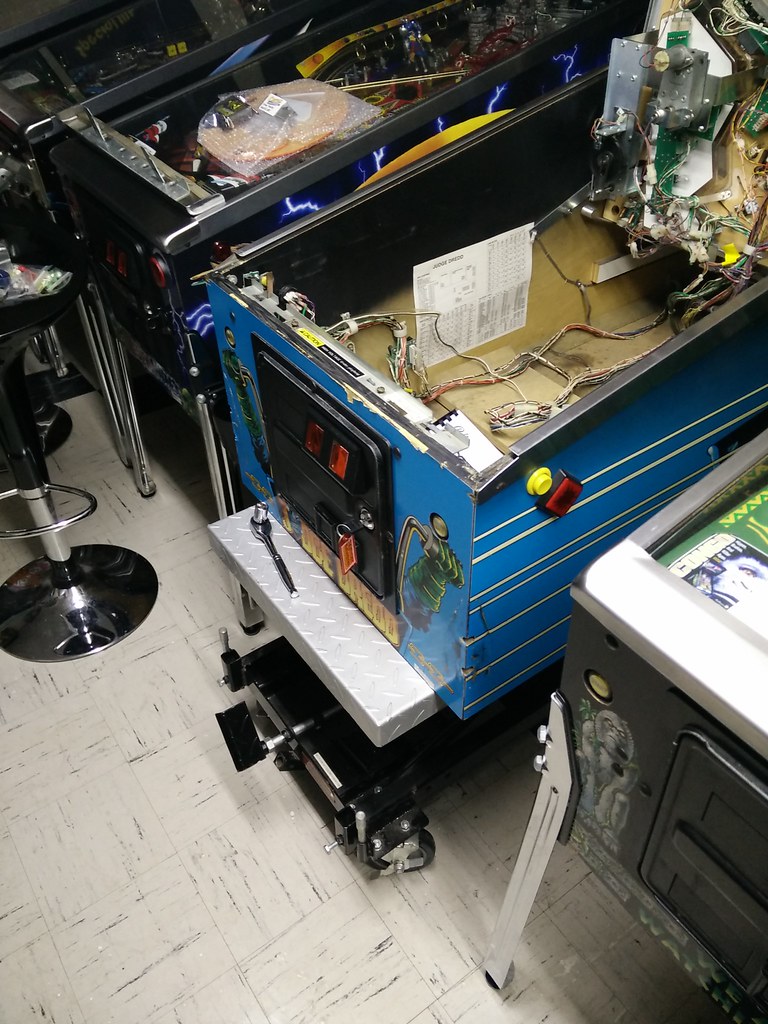 Next up was pinbits and I had always wanted to do the Deadworld mod when I had a Judge Dredd 2 year ago but never got around to it. Before I started installing it I checked all related optos such as left ramp entrance, divertor, crane, crane exit and ball trough. I cleaned them all with a q-tip and isopropyl alcohol even though they all checked out just fine. 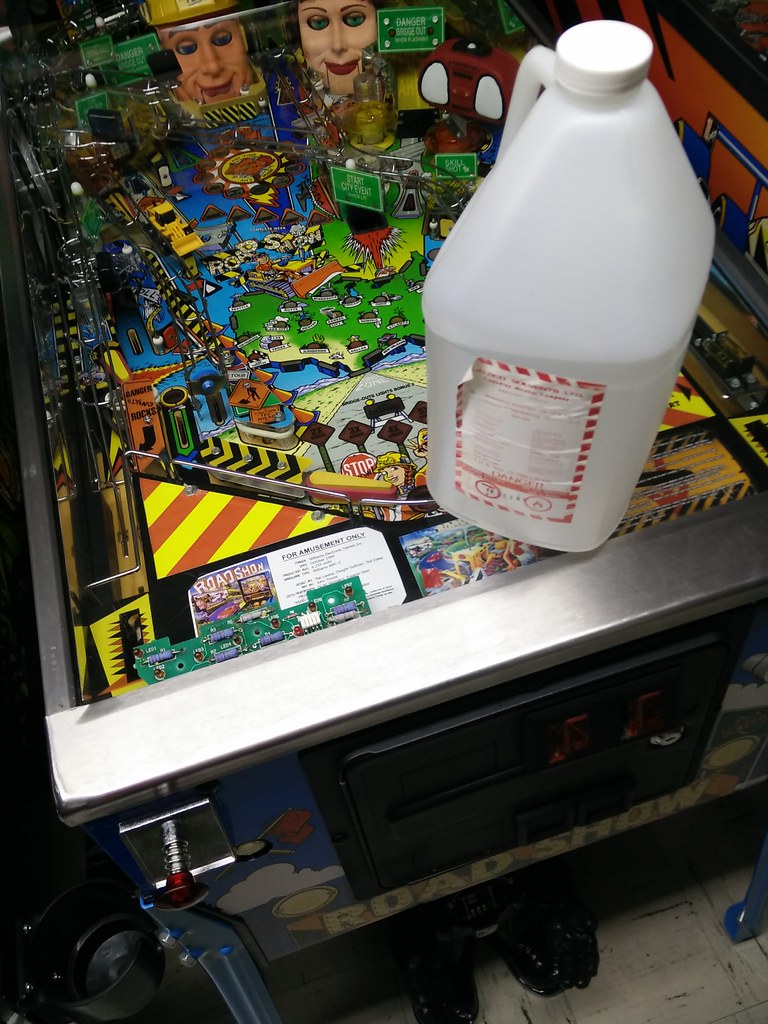 The Deadworld mod itself is pretty easy to install and hardest part would just be transferring over these from the original disc to new disc otherwise 6 philips screws and 2 mins you are done! 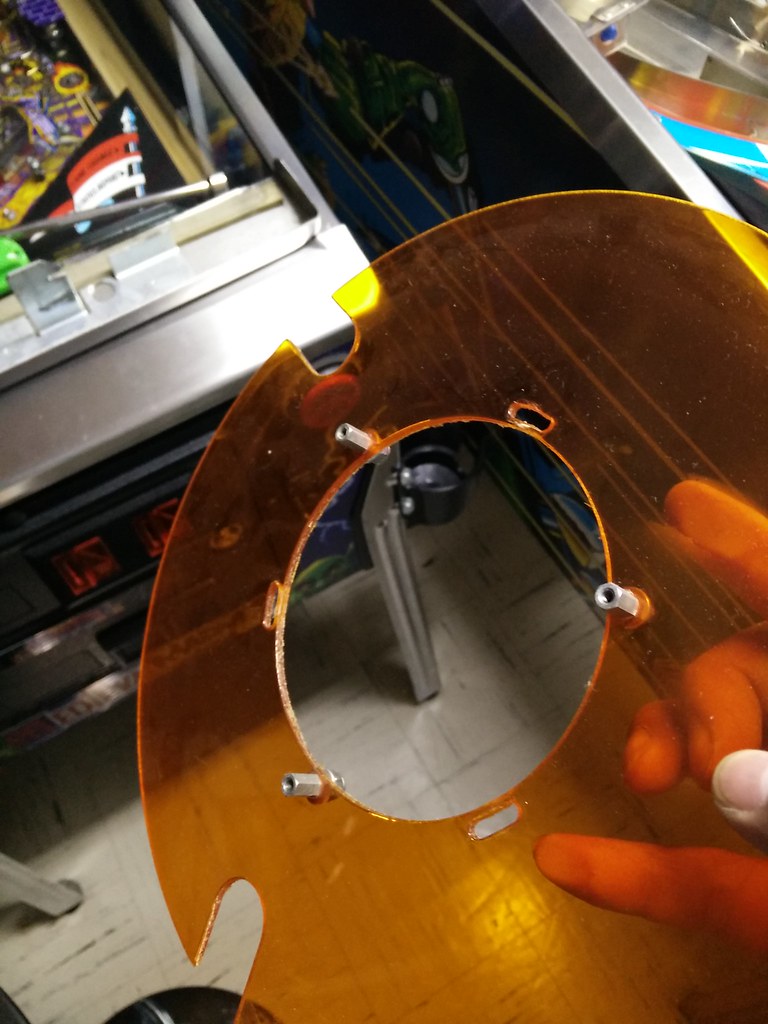 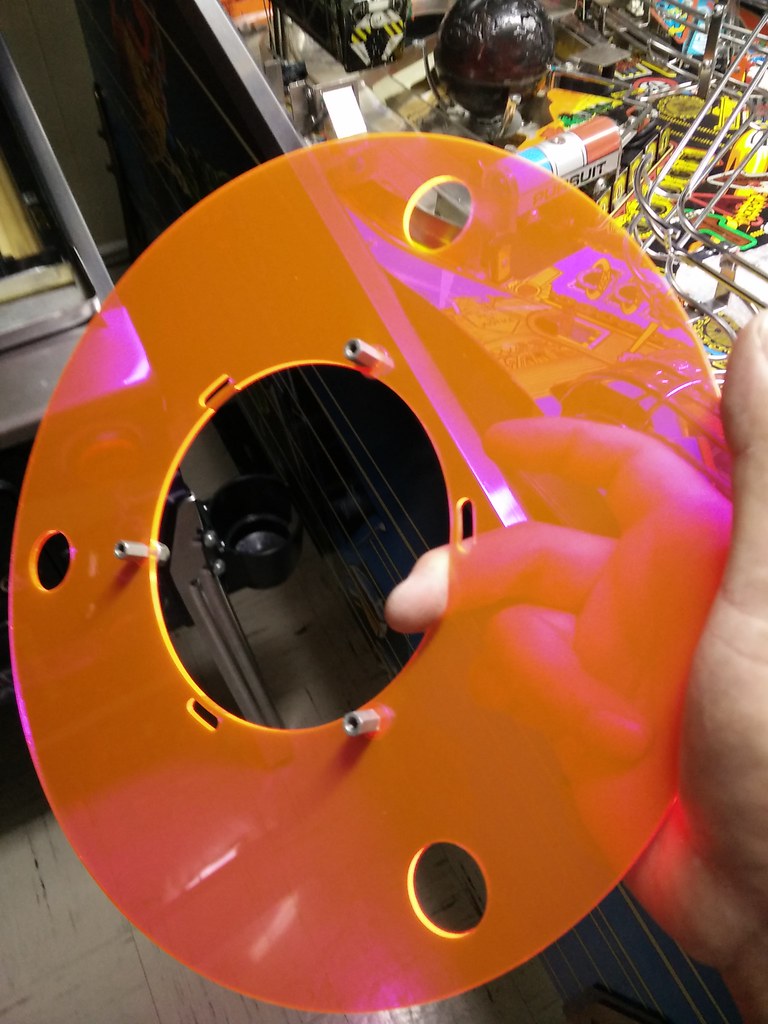 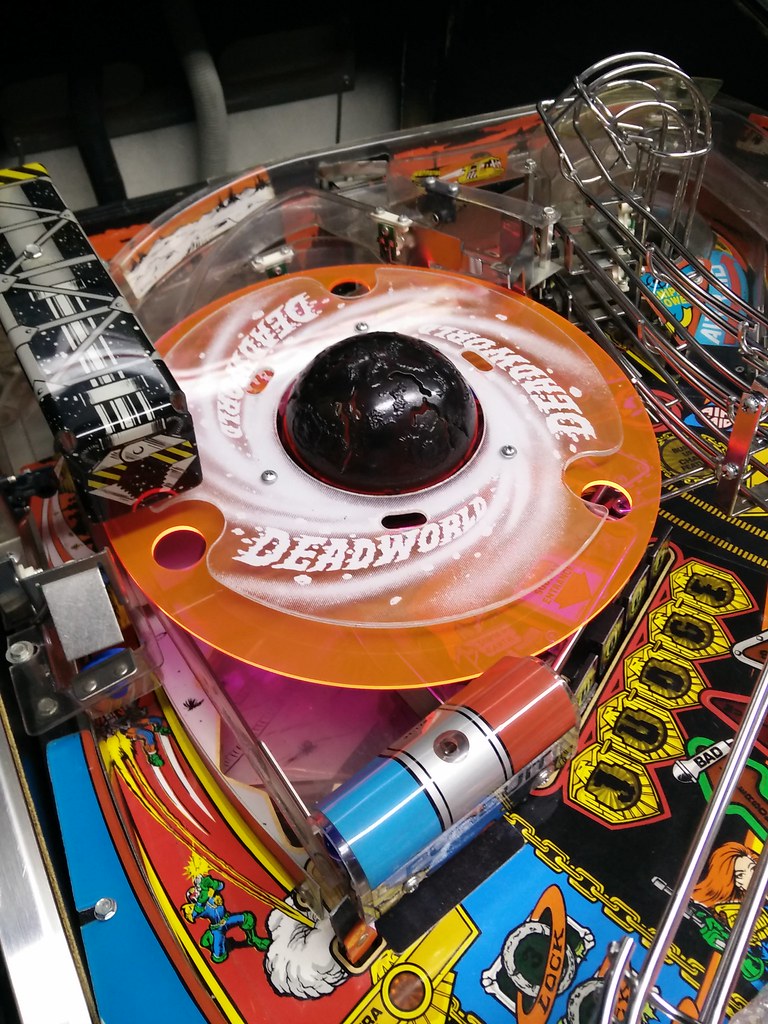 The last step is to swap in the provided L1AT game rom supplied by pinbits and you are off to the races. 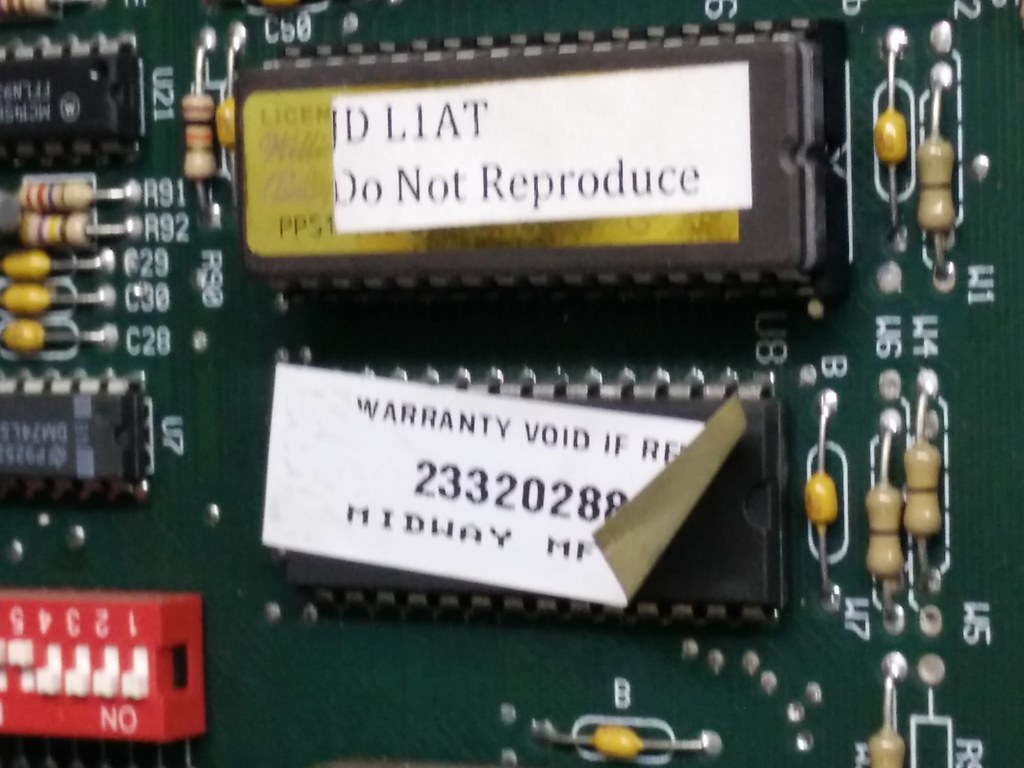 This has got to be one of the neatest physical ball locks in pinball as your locked balls continue spinning around until you start multi-ball and then the crane picks them up and drops onto the playfield one by one. 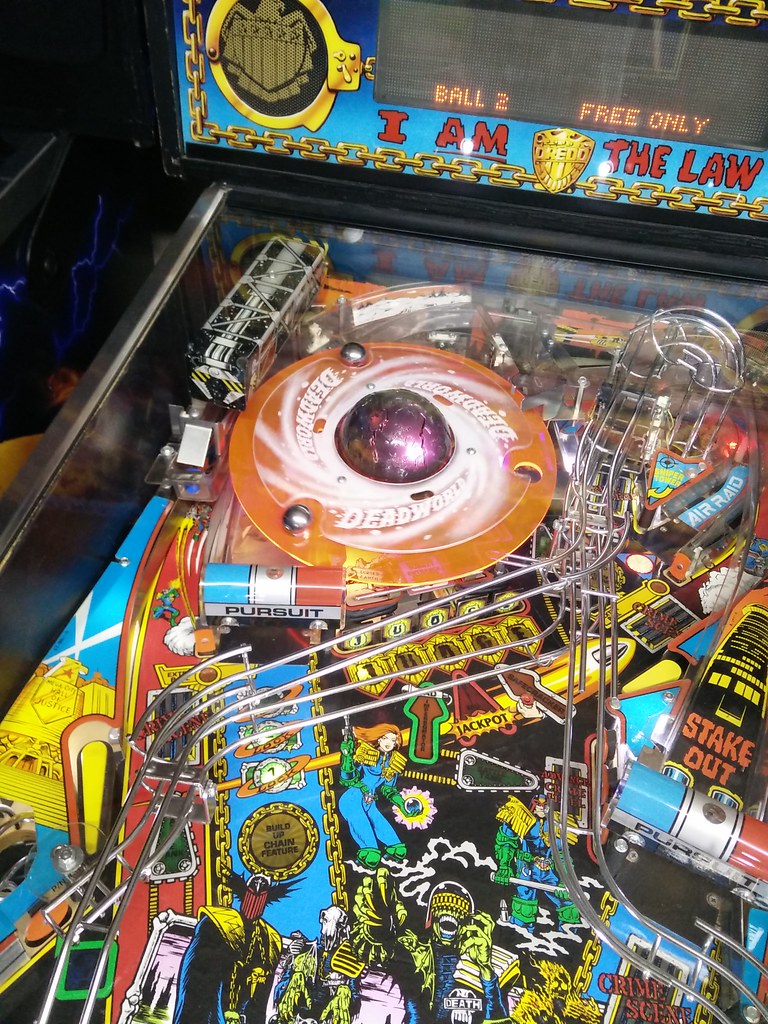 Some might argue that you are running earlier code with lots of bugs and it makes the game easier since it gives you time to make some shots before all 3 balls are physically unloaded to the playfield. If you don't have Deadworld mod installed the game uses virtual ball locks so 2 shots of the left ramp will lock 2 balls and third shot will divert ball to Deadworld and then it will spin over to the crane to unload meanwhile the other balls are launched immediately from the ball trough.

I can see why Bally/Williams removed this from the final production game because it can cause all sorts of problems on route for operators. The worse one being the crane and/or magnet fails and your locked balls will stay up on the spinning disc indefinitely rendering the game pretty much useless and not able to earn.

My machine isn't working properly and I think I only managed to play 1-2 flawless game so far since installing the mod. I believe the issue has to do with the crane unloading the balls consistently and triggering the crane exit opto. Sometimes it will grab the ball but the magnet appears to release too early and ends up dribbling down the front just under the pursuit flasher. If that happens then the game still thinks there is a ball on the disc and as a result your ball will never end. I also get premature ball ending too so not sure if it is related to my ball trough or crane exit opto not being triggered consistently. I will be playing multi-ball and drain a few balls meanwhile there will still be 2-3 balls in play and the ball ends.

Here is a youtube video of what my crane is currently doing and I believe it is just an adjustment to eccentric and lifter wheel. You will notice around the 1:00 mark it works pretty consistently at picking up, holding and dropping the ball. Once I get it working consistently (or hopefully 100%) I will see how the game behaves before I start throwing new parts at it such as new GLM ball trough boards in case my existing ones are flakey. I will also follow up with pics and description of what other things I had to tweak to get this working so stay tuned.

As we've already been discussing off-line, your crane magnet is turning on too late in the ball removal travel so you need to find what opto triggers the crane magnet and adjust it so it turns on sooner. If the crane is already moving away from the disc before the magnet turns on, it's too late. It's a small magnet and isn't strong enough to pull the ball up and out AND across the disc at the same time... Needs to grab it at the point where it's just straight up. (which you can see in your vid is when it's successful)

That should hopefully fix it.

The Deadworld makes the actual multiball a little easier (at the start) since the delivery of balls to the playfield is a little staggered. You might catch a judge before all 4 balls are in play and interfering with each other. However, locking balls is a lot easier without the Deadworld because you can hit the virtual locks one after the other from the right flipper. With DW it makes you launch a new ball and get it over to the right flipper to lock. So with DW getting to multiball is harder.

The other thing that happens is in multiplayer games if one player locked a ball or two, other players will have an easier time locking because they'll only do virtual locks.

I also think that with DW the setting for the second extra ball is different. It's set to something like 22 crime scenes instead of 16 without DW. Finally I've noticed that after 6 or 7 shots to the left ramp, with the DW rom the diverter kicks in to send the ball to the DW and interrupt the spam a bit. I'm not sure if that was in the non-DW rom I had.

Overall the game is now a little harder, and cooler

Re the cracked ramp, you can try this stuff. Works extremely well when used on the right plastic. See the list on the package front.

I haven't tried gluing a ramp (yet). I will bring some over soon.

You can try emailing the info email on the back... but I suspect you will need to know the type of plastic the ramp is made of to get any useful information back. 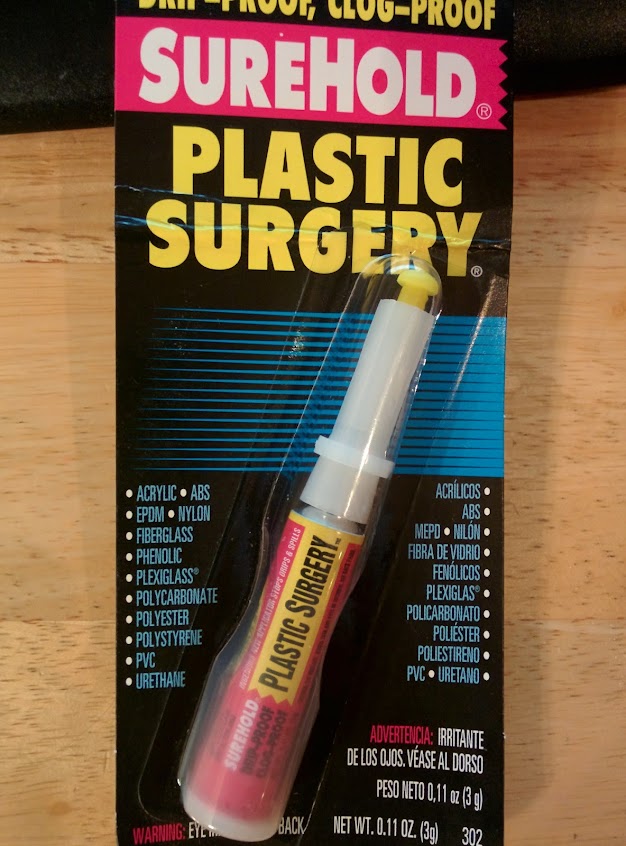 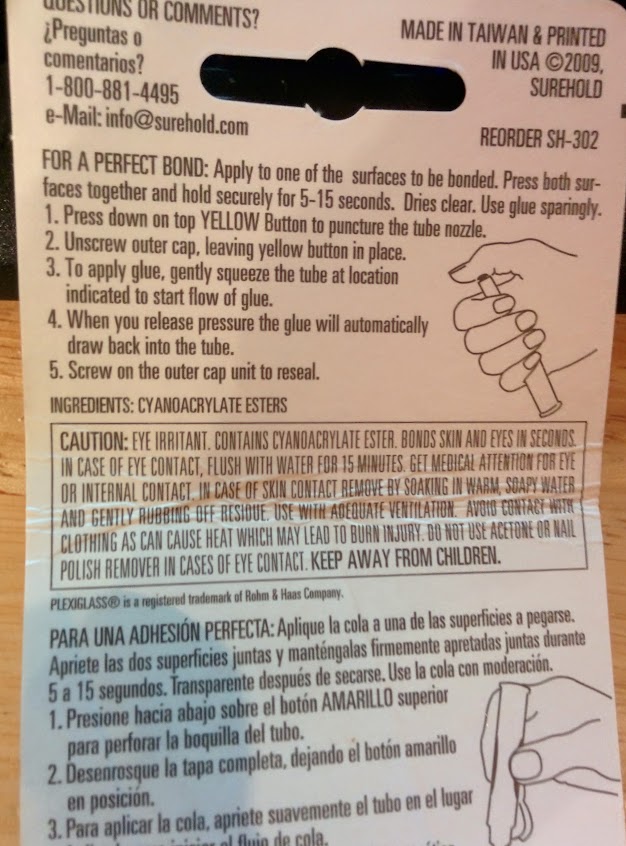 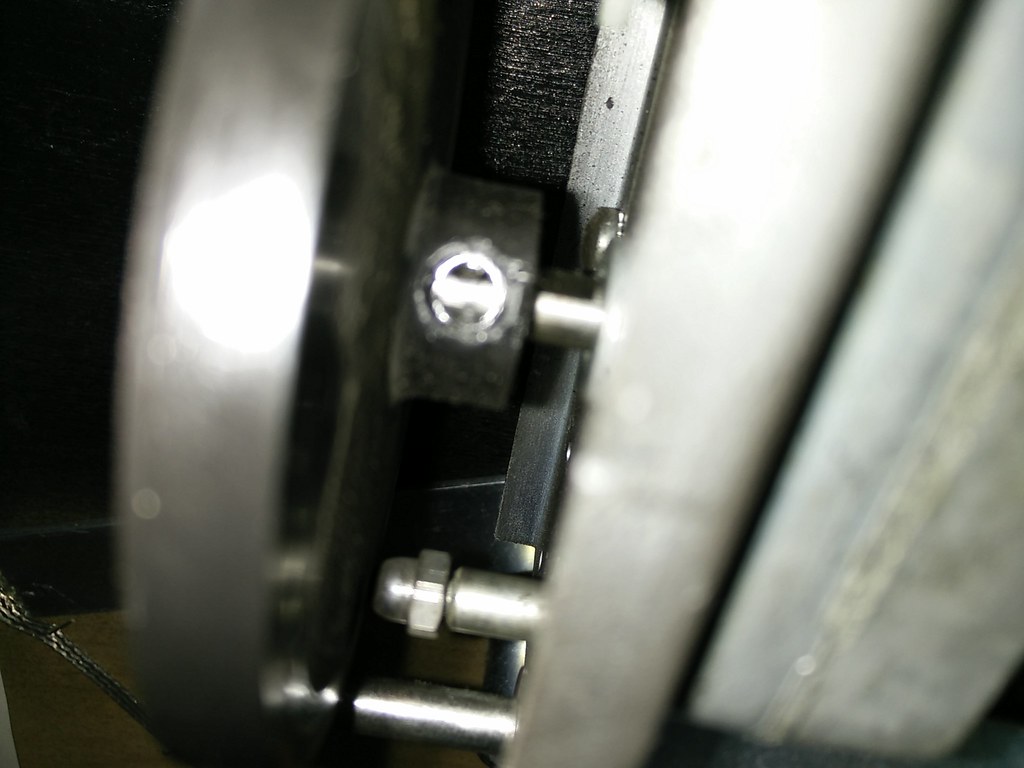 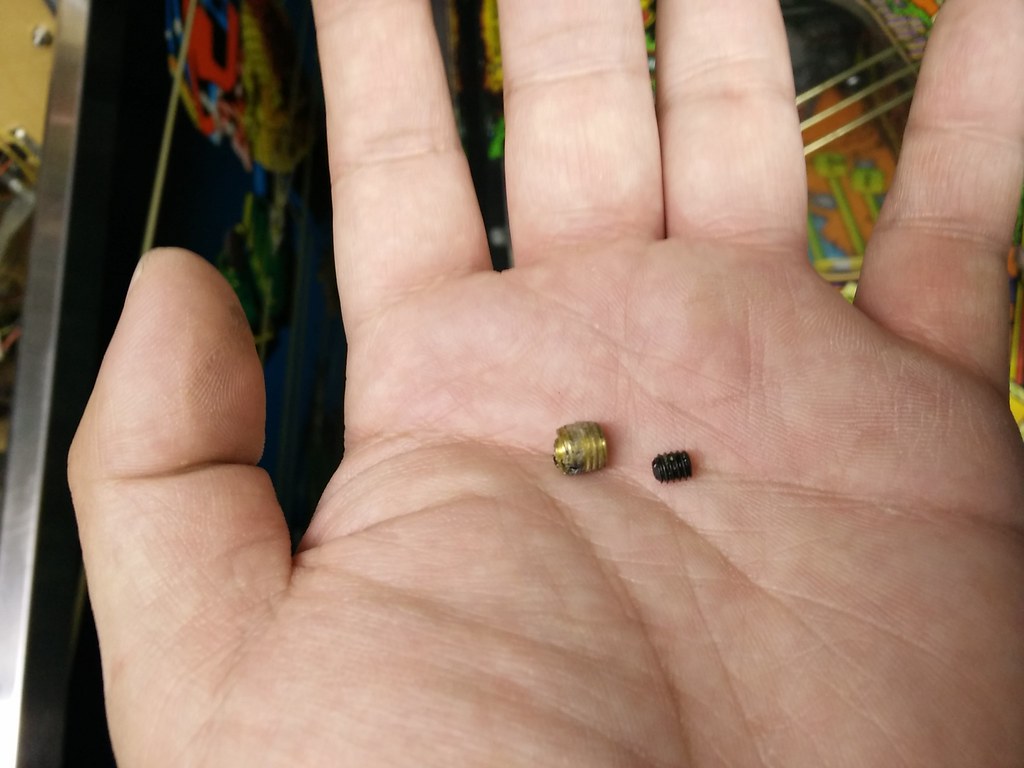 After reading the link goobma pasted (thanks by the way!), I now understand why the guy's wheel has the hacks it does :FP: 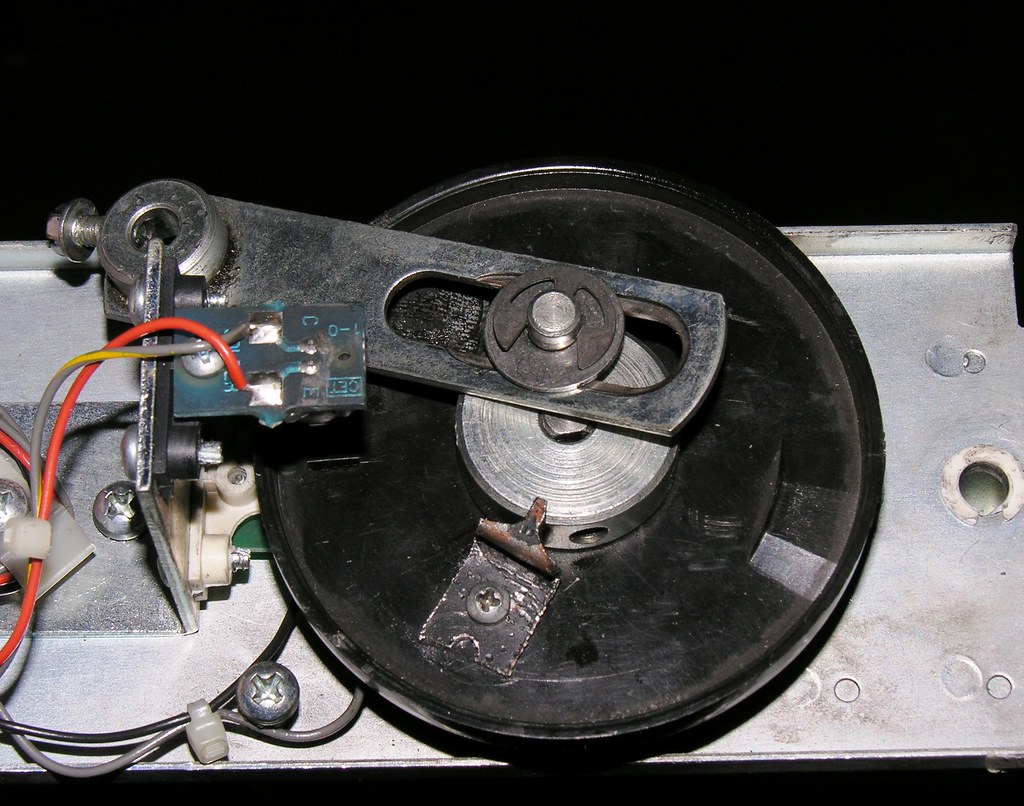 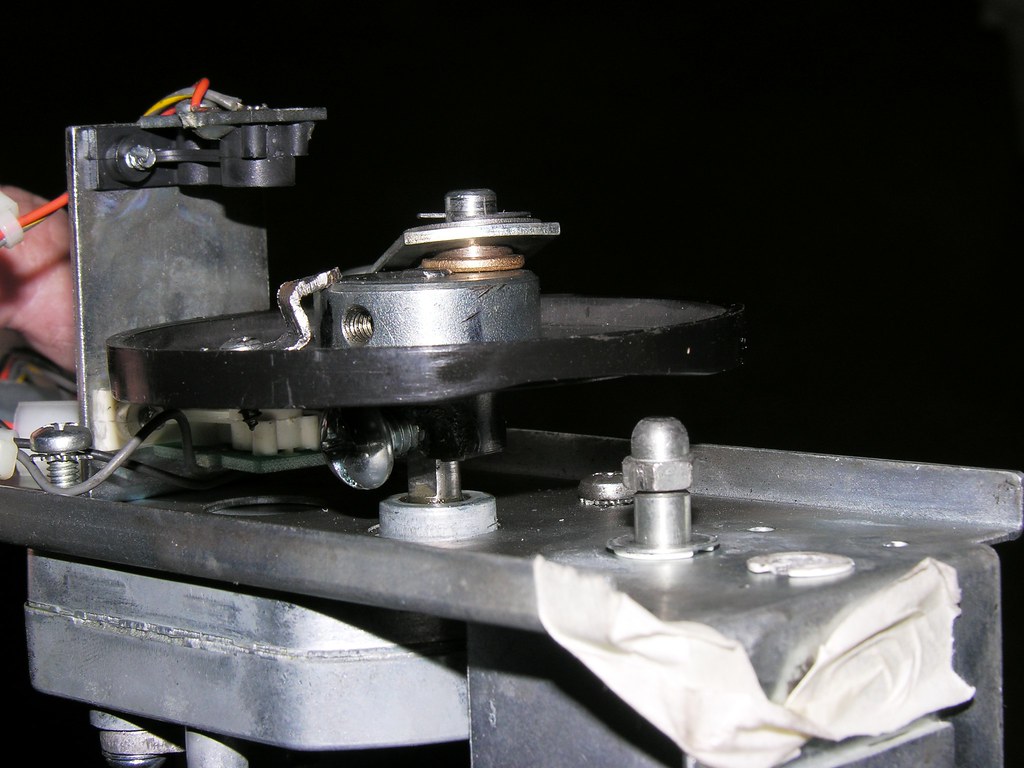 The way this motor and wheel works is that silver lever arm is what controls the crane's left/right movement. If you look at the disc in the pic above it is not perfectly flat around the edges and that is because the rod that raises the crane up/down rides along it. If you look at the top pic you will notice there is a very small slit at 9pm or else you can clearly see it here from Marco's website. This slit is what aligns with the opto and tells the game that the crane is at the furthest point to the right. It is likely what is used to trigger that magnet that must be on a very short timer to carry the ball off the Deadworld disc and drop into the left orbit crane exit. The trick here is the set screw is used to get the crane cam lifter wheel aligned at the right time with the opto just as the crane is physically at the far right position just before it starts coming back left. At the same time with the set screw you must also get the optimal vertical position on the shaft so that your crane is not sitting too high making it harder for the magnet to pick up the ball or too low because it will start hitting things on both side.

This is how mine is right now because there is not set screw the crane cam lifter wheel it is sitting in the lowest position and therefore hitting the bracket on the left holding the crane exit opto and the top clear Deadworld disc. For the time being I have removed the Deadworld mod and unplugged the crane as you can see here in this picture. 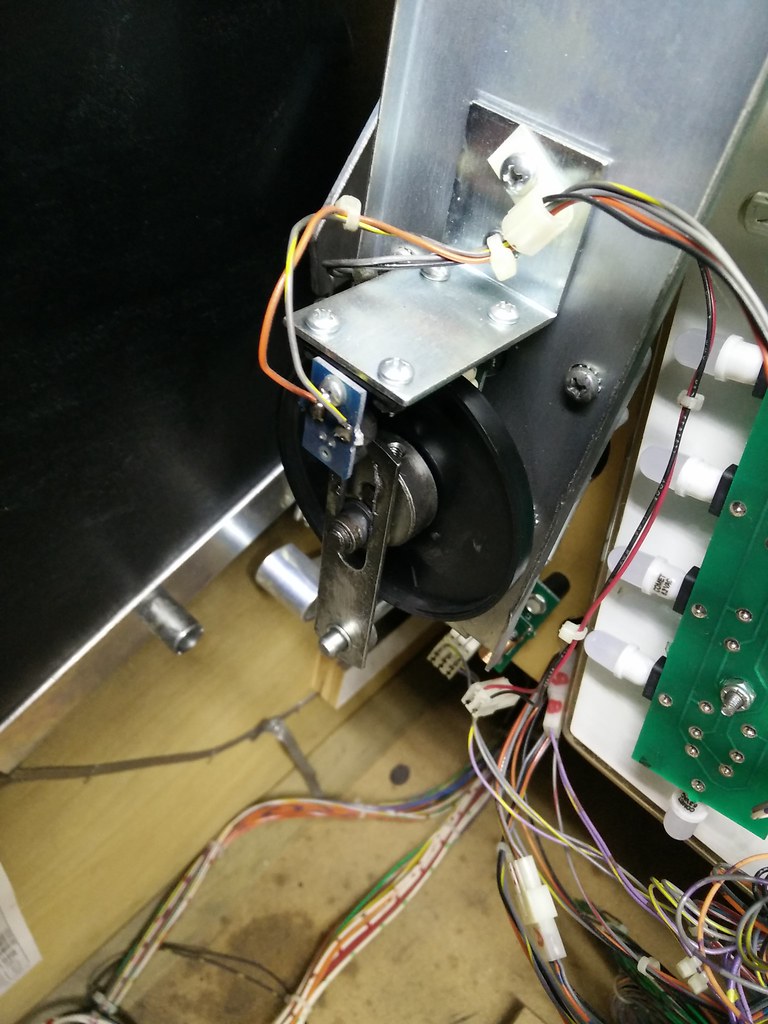 The reason I unplugged the crane is because on start up it swings the crane left/right and since my crane is lighting hitting things I don't need to grind the gears or do any other potential damage. There is no point in the crane moving since the magnet will not trigger or pick up the ball when it is suppose to so. I installed back the original production ROM that came with the game as it has code to compensate for a broken or not properly aligned crane. I know after a few more plays the game will throw up an error report for opto 70, 71 not being triggered by the crane and opto 62 might come up in the error report soon because the crane magnet is permanently blocking the beam at the exit.

I am now mentally preparing myself for the credit dots to come from and maybe I will use an old trick from being a die hard VW/Audi owner and stick up some electrical tape to cover the credit dot like I use to for my endless check engine lights :lol:

I have checked availability for the cam lifter wheel and there is no availability from Pinbits and Marco. I did email Pam at Pinbits to see when it would be available along with these other parts which are unique to this game and sure one day or might already be "unobtainium".

I managed to find part I need from Pinball Spare Parts Australia and they also have the lower planet opto interrupter. I will likely order 2 of each just to keep on hand and I know these guys aren't cheap to ship to Canada

I might try to McGyver something one my existing wheel since it is garbage anyways to see if I can get it working for the time being.

Thanks for the Plastic Surgery tip Barry and can't wait to try it next time I have you over. I had to update the code on my MM from 1.0 to 1.09c so Elliot's GC has been wiped so make sure you watch Bowen's tutorial so you have a better understanding of the rules and max scoring

Glad to see you took what we discussed yesterday and put it to good use! Half the fun of fixing these games is figuring out the theory of operation, and then applying what you've learned to figure out exactly what the mech ISN'T doing correctly that is causing the problem.

There are enough JD's out there in the wild and these opto interrupter discs are a very high failure part in any game they are in. If there is enough demand I'm sure we'll see an aluminum version released at some point, just like the TOM trunk opto interrupter.