Hey guys, thought I’d throw up this wanted post as a desperate attempt to acquire my grail. I would do almost anything for an Indiana Jones, but with the current market value, it’s not going to happen. So in an attempt to own one, I was thinking of replicating the cabinet they have at Disney World, one that is themed to the era of th movie, see pic below. i have the skills to build the cabinet, so I was hoping to find a populated (hopefully trashed) playfield that could be transferred over to a new replica playfield. I would then have to find all the bits and pieces, PCBs etc to make it functional.

I fully expect this never to come to fruition, but figured I‘d throw out a Hail Mary to see if anyone has anything. All the other parts could be sourced afterwards. My hope would be this effort would yield a pin for about $5-6k. Again, I’m likely dreaming, but gotta try. 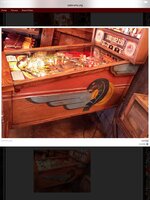 You will spend more buying piecemeal as opposed to a complete games and modifying it.

The sum of the parts is greater than the whole.
Reactions: Lamonsoff
L

Thanks @meegis, that doesn’t surprise me. There’s been a couple vids I’ve restored that have cost a pretty penny to bring back to original.

But who knows, maybe someone has a waterlogged cab they would look to sell as a whole too. Again, the likelihood is almost next to nil

Bide tour time.
Watch the forums and wait.
You may have to buy out of the US.
Just be ready to pull the trigger when it happens.
Also, keep note of auction fees and taxes. Know your limit, stick to it.
A big place in CA is closing and auctioning off the collection.
Reactions: Lamonsoff

I understand why you would want to recreate that specific art package, it's just gorgeous and so well adapted to the theme. But the advice your getting both from @meegis and @BMHouze is solid! Still, nice project man, and if you ever make this happen I'll want to see it for sure!

P.s Anybody knows who modded this game originally for Disney, the Imagineers maybe?
Reactions: Lamonsoff
L