Godzilla is a game you don’t get to see too often and I was happy to get mine off Dave Astil in a moment of weakness when he released it from his clutches and if you ask him that is the one game he regrets selling. Mainly because the game is rare as far as DMD’s goes and IPDB doesn't even have a production number but if I had to guess I would say it is sub 1000 for sure, but I have no real idea.

The game itself is very simplistic, it’s execution is where the fun is. The main point of the game is multiball and Each of these multiballs are lit through different shots on the playfield.

Taxi
Taxi is the simplest, bash on the T-A-X-I targets under the massive Godzilla head and it will light Taxi multiball.

Sonar
Sonar is interesting as you can spot one set of sonars targets from the awards by shooting the left loop and I like the use of the captive balls. You need to know the captive ball beside the right ramp from one side of the ramp to the other. It’s a good use for the captive ball and works well and it also adds an element of strategy when you are playing multiplayer.

If you can remember and knock the ball back to the side the other player had knocked it from you are now forcing them to make two shots instead of one to light their Sonar multiball. It is a small thing but annoying when you are trying to get Sonar lit.

Godzilla
Godzilla multiball is lit using the right ramp and you shoot it X number of times depending on software settings to light it. Once lit you can start a mode call Score Does Matter where each ramp shot is now worth 5 million for as long as you can shoot the right ramp and not miss. 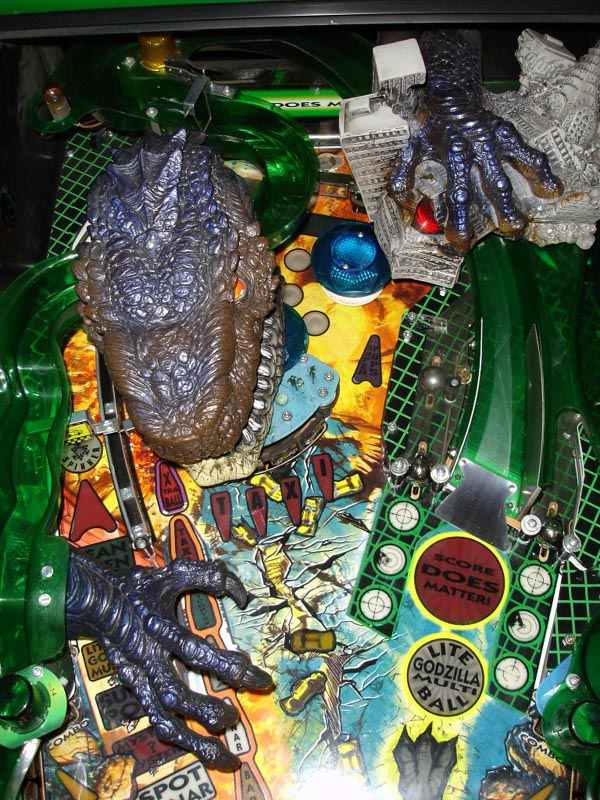 Baby Zilla
This one is similar to Godzilla multiball but the only difference is you shoot the left loop but you also get rewards for it. Most being pretty useless except for Spot sonar. 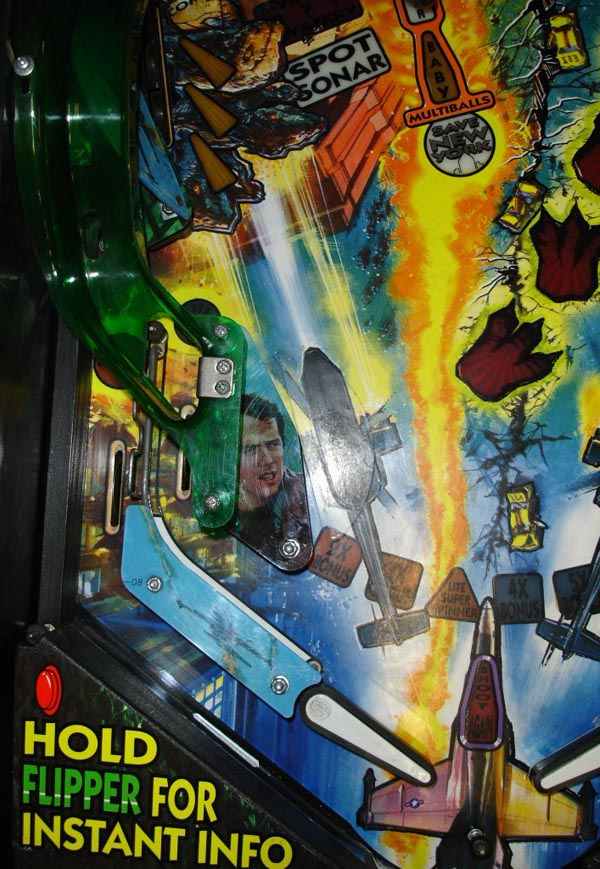 The first award spots one full set of Sonar targets and then Mean Green which reward actually escapes me. I think it’s similar to Score does matter except you shoot the left loop. But usually no one ever gets that far since Mean Green is the 5th award which requires a ton of shots and can’t be advanced during multiball.

Helicopter
This last one is the toughest and it’s the one most people don’t understand. To advance helicopter you must roll down an inlane and then shoot the opposite COMBO target. These combo targets are on the left and right hand side of the machine above some standups that do basically nothing. I mean you get points for completing them but it’s so insignificant they might as well not be there but those standups do act as your jackpot shot during the multiball.

I forgot to add that once you are in any of these multiballs the same corresponding shot is the jackpot shot during multiball. Any progress you made on any of those shots is lost once you start the corresponding multiball. So as an example, you can’t start Score Does Matter which resets the Godzilla shots back down to one, build up the shots to one away from Godzilla multiball, play it and then be one shot away from your next multiball. Once you play a multiball all progress for the multiball you are playing is lost and everything starts back at 0.

Now that we understand the multiballs, the scoring is the next most important thing. All multiballs start on a little inner loop on the left side beside Godzilla's head. It’s the shot to the right of the left loop. 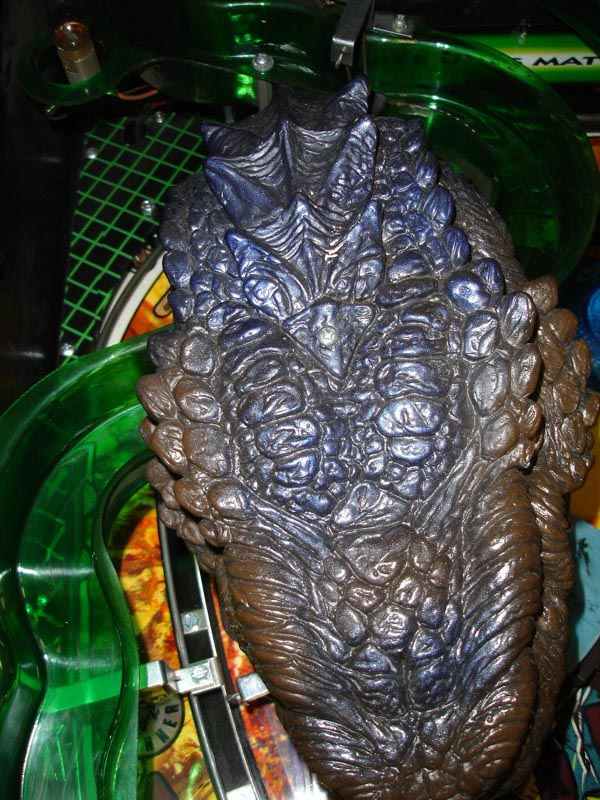 The main point of the game is to light all 5 multiballs and then start them all at once. Doing this will give you a jackpot value of 25 million. But what is cool is that you can choose to say light Taxi and start it right away and then during multiball, work on all of the other ones and bring them in but for much less value. The base value of a single multiball start is only 5 million compared to that of the 25 million. Then for every multiball you start while still in the first multiball you add I think 2 million to the jackpot shots. You can also get better values by say starting 2 at the same time instead of one. So for example, ifyou start one and bring one in the base jackpot value is 7 million. But if you start two multiballs the base jackpot value is I think 8-9 million. It’s an interesting way of dealing with the risk vs reward because the game wants you to do all 5 and rewards you but doesn’t force you. You get to decide how much value you want to build before you start your multiball.

After you have played all 5 multiballs either via starting each one at a time or all at once you light Save New York. Same premise as all the other ones but the difference is the jackpot value but this I’m a little fuzzy on. The Save New York value is either the highest Jackpot value you have achieved during the multiballs or the last jackpot value before you lit it, I forget which and I’ll have to verify on my machine. But it’s the same as the others, except that all you have to do is spell New York and once you do that, it kills the flippers and you have “Saved New York”.

The bonus for doing that is now all multiball values are doubled (Still have to confirm if that is for the ball or rest of the game). So the next multiball you get all of your Jackpot values are now doubled so it is very lucrative to finish Save New York.

And that is pretty much it, like I said, a simplistic game but fun in its execution.

Sweet! I've enjoyed Godzilla the few times I've gotten to try it... but never enough to really grasp it.

Pretty sure the production for this game was 510 confirmed units.
I found a decent example in NJ and the price on it it still very reasonable at roughly $2500 (if you can find one) but getting it home simply didn't make any sense at all.

I think most people are turned off by the huge-ass toy that blocks so much of the playfield; but it doesn't seem to get in the way at all.
One of the few games where a shaker is very well implemented.