For as long as I've been collecting pins I've heard how great the spinners were on classic Stern machines. I didn't really get it, they all seemed pretty much the same to me, but there did seem to be a different element of satisfaction when you'd rip the spinner on these games.

I stayed away from them for a long time until recently picking up a 1979 Stern METEOR. It's turned out to be a fantastic game with simple yet challenging game play and some cool scoring features. But I was a bit bummed to see that my game came with an old Gottlieb spinner. I got it balanced just right and reduced as much drag on it as possible by adjusting the switch tension. I also buffed the wire arms and even applied a small dot of teflon lube where it entered the two holes at the bracket. It spun pretty well, but it still didn't quite feel the same. So, off I went to find an original stern spinner.

For anyone that has looked, they're not that easy to find. Repros are based on the old GTB/Bally standard and I wanted to make sure that, if I was going to go to the trouble, I had the real deal.

I could not find any online references as to why the Stern spinners were better or different, but I went on faith.... and when one popped up on eBay, I happily paid $30+ to purchase and ship the part to me post haste!

And then it arrived.

It looked like any other spinner so now I was sort of peeved that I might have just spent $30 on a used spinner for no good reason.

So, to settle the issue, I embarked on a small comparison test.
Submitted for your approval, from left to right, my new (old) classic Stern spinner, an EM era Gottlieb spinner, and an 80's Williams spinner from a High Speed. These are what I had on hand. I'm going to assume that the GTB is interchangeable with a classic Bally of the same era. 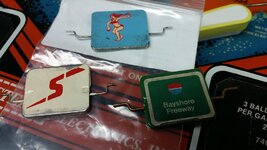 First, we have to look at the size.
I used the highly scientific method pictured below. When stacked on top of each other, it appears that there is almost no difference between the three. Although, you will notice that the wire on the Williams spinner is a bit thicker gauge and follows a slightly different bend. It's also located a little closer to centre than the other two. Otherwise, they are all the same height and width. 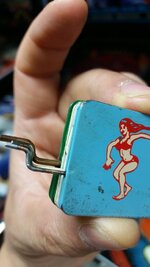 Next up, how thick are they?
My handy dandy caliper shows the following:

I figured the Williams would be thicker simply because of the heavier wire... but I was surprised to see that the Stern was thicker than the GTB as they looked very similar. 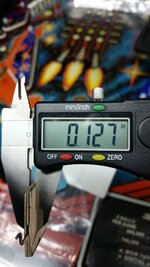 The final thing I had to test was the weight.
I placed each of them on a digital kitchen scale and got the following readings:

While it was no surprise that the beefier Williams target was the heavyweight, I was surprised to learn that the Stern was a full 5g heavier than it's closest cousin.

I don't know if this is conclusive evidence, but it certainly lends some weight to the argument that classic Stern spinners feel and spin a lot better than other games of that era. They are heavier than Gottliebs (and likely Bally) of similar era and their wire is slightly more off centre than the next closest Williams example. Not to mention that the thinner gauge wire on the stern (although maybe less durable) probably produces less friction than the thicker Williams one.

I have also heard that the Stern software calculates each opening and closing of the switch as a separate hit, so you are essentially getting double the spins vs. a Bally or GTB of the same era. Factor in the cool sound effects for each spin and that could greatly improve the overall experience of ripping that spinner!

So, armed with all this new info, I was finally satisfied that my money wasn't totally wasted and I proceeded to refinish my original Stern spinner for METEOR... and have been very happy ever since. 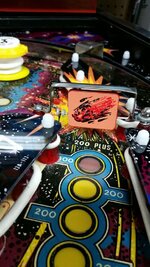 Can't speak to the classics, but the spinner on my Stern Sopranos is hella satisfying. They must just have the spinner secret recipe......

DRANO said:
I don't know if this is conclusive evidence, but it certainly lends some weight to the argument that classic Stern spinners feel and spin a lot better than other games of that era.
Click to expand...

So, what's the conclusion? All other things being equal, how does upgrading your Stern Meteor from a Gottlieb spinner to a 0.012" thicker and 5g heavier Stern spinner feel to you?

superjackpot said:
So, what's the conclusion? All other things being equal, how does upgrading your Stern Meteor from a Gottlieb spinner to a 0.012" thicker and 5g heavier Stern spinner feel to you?
Click to expand...

Well, I "think" it spins better but I have no way to quantify that.
All I wanted to do was establish that there was a physical difference. So there's at least some grounds for people who state that classic Stern spinners get more rotations and feel better.

The spinners on my Stargazer after some lubrication (on the spinners, not me, well a little bit) are fast as lightning and yeah trigger twice the normal amount, with the cool SFX man is it great. I never cared much about spinners till recently but I'm now a spinner junkie. Blackout is another game that has 3 fast moving spinners but lack the sound, I have a Sorcerer coming next week, cool SFX for sure when you nail the spinners and Quicksilver which I would really like to find.

Nice spinner's are great.
So are great drop targets.

Happy to see pinball progress as it should.

Spinners are great, but my favourite sound in the world is the sound of the Mata Hari drop targets resetting (for the second time) followed immediately by the loud knock of the free game.