For anyone new to the hobby, this will be an ongoing list of what we think are scams, so please be careful out there. They seem to pop up like crazy around Christmas time.

I'm pretty sure that pic is from that guy in the states who charges crazy high prices for his pins.
Amazing that that house is now in the GTA. :lol:

Another scam advertized on Kijiji Saskatchewan and Ottawa.
The one in Sask seems to have been taken down now.
$5000 again ?

And there's one on Kijiji for a TAFG for 5k yea right lol :shock:

Pretty sure it's a scam

Well considering it's presently on eBay for $20 000 by a well-known arcade company in Texas, I'd say it is a scam.

The black and white tiles are a dead giveaway.

Mind you, it's hard for me to decide which is the bigger scam...$5K for a machine you never see or $20 000 for a machine that is probably only worth $12 - $14 and maybe less in the near future ( depending on remakes ). I guess from a pure loss-of-money perspective, getting ripped off $5K is actually the better deal !!! :lol:

Be careful of the following ads on kijiji:

Beware of a seller in St.Albert, Alberta selling an Addams Family. The listing goes up every so often, but don't be fooled by it. The seller tries to come off as a nice guy, and makes you believe that the pinball is in excellent shape but it's anything but. The playfield also has a crack which the seller glued together; this was something he never mentioned over the phone. Seller was also very antsy to have money wired to him. If anyone ever comes across an Addams Family in Alberta, please PM me with details. I can give you the name of the seller in case he tries to pull a fast one on anyone.

One thing I learned in this hobby is if you try to fu*k one member, you fu*k the entire community. Black listed like a mutha fuc*a.

Good thread to keep around!

thanks for the heads up - I was really surprised to see that there are so many scammers in this hobby!?. Theres that guy that advertises from Kingston.. <-- who mentions selling because of his dying father..

I spoke with the original owner from Switzerland.

This pin was sold to a buddy of his, and currently resides in Lyons, France.

So, I advise to avoid dealings with the OP, and maybe the site admins of MACCA should take a look for duplicate IP's/accounts, or trace the IP and give the community a heads up to where this scammer resides.

Thanks for the tip, Smokedog!

"HELLO , I AM VERY HAPPY TO READ FROM YOU , ALL OUR PINBALL MACHINES ARE IN GOOD WORKING CONDITION , IT WILL COST $2000 FOR A MACHINE , I AM LOCATED AT NORTH CAROLINA/CHARLOTTE 'BELOW ARE SOME OF THE MACHINES WE HAVE AVAILABLE RIGHT NOW ."

That same guy listed in BC area as well. Got the same reply.

Now, let's trail him along and see what the scam is? I wonder if he will take a money order from a bank in Nigeria? Let's find out.

$2000 per machine? You rarely see a good Harlet Davidson for that price - or a Star Waes for that matter. I'll take three. I reply.

HELO TO YOU TWO RICHARD THOMPSON. I VERY MUCH TO BUY YOU CIRQUS VOLTAIRE, NATMAN FOREVER AND HARLET DAVIDSON. HOW TO PROCEED?
Click to expand...

His reply - which was quick.


Richards said:
hello , first i will like to know where you are located ?? thanks
Click to expand...

HELO RICHARD. I AM IN SEATTLE.
Click to expand...

Almost right away I got another reply.


Richards said:
ok so when will you be needing the machines ??
Click to expand...

I fire right back..

HALO. AS SOON AS POSSIBLE WOULD BE THE BEST.
Click to expand...


Richards said:
then we can arrange for the shipping right now
Click to expand...

Shipping? No way. My "brother" who just happens to live in NC is going to pick these up. Let's make sure they are all there first.

ARE ALL MACHINES IN CHARLOTTE NOW? SO ALL WILL BE SHIP FROM YOU PLACE?
Click to expand...


Richards said:
yes the machines are in Charlotte right now . and i will also be needing your full address
Click to expand...

No sir. No address for you yet.

PERFECT THEM. NO NEEDS TO SHIPPING. I HAVE BROTHER IN CHARLOTTE. CAN HE PICK UP?
Click to expand...

Richards said:
yes that will be nice . when can he come over ??
Click to expand...

Didn't expect that. Let's see if I can get a location from him.

WHAT IS UR ADDRESS? I CAN GIVE TWO HIM AND ASK WHEN HE COME OVER.
Click to expand...

Richards said:
here is my address

I guess scammers don't give a shit if they send people to someone elses address. The guy is probably in Nigeria or something.

OK. I GIVE HIM. CAN YOU SEND ME PIX OF MACHINE I WILL BUY? ALSO HOW TO PAY YOU?
Click to expand...

Richards said:
since you brother is coming over he will take the pics and let you see them , it will cost $4000 for the two machine ok
Click to expand...

OK. I NEED SEND YOU MONEYS. BROTHER JUST PICKING UP. ALSO. NEED TO SEE PICTURES TO MAKE SURE MACHINES NOT RUSTY. BROTHER NOT HAVE CAMERAS.
Click to expand...

Richards said:
ok . let me send you the photos
Click to expand...

It took a few hours for the reply. Probably digging online trying to find pictures of a cherry Harlet Davidson or Natman Forever pinball machine. This is what he sent.

He included a bunch of pictures. Here are a few: 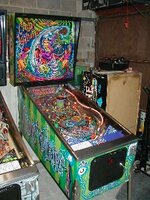 Found this picture on http://www.wakefieldpinball.com/ 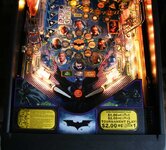 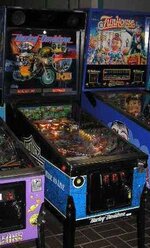 THOSE ARE THE MACHIONES I BUYING??? THEY LOOK PERFECT!

So far no reply. I'll update when I get one.

LOL, that was classic.

He hasn't replied so I just followed up.

Nothing like CAPS LOCK to get the point across.

He's a terrible scammer. I have a money order from the 1st Bank of Nigeria just waiting for him. Take my money!
Reactions: scylla

This is hilarious. Please keep us updated on the progress of your transaction.

BTW you can find fake/expired Western Union numbers on the internet. My other half has used these to mess with scammrs.